Text adapted from "The patient with dementia" in Psychiatry in primary care by Kenneth Le Clair, Dallas Seitz and Julia Kirkham.  (CAMH, 2019).

(For more on using the P.I.E.C.E.S. template, please refer to the page on Assessing Dementia and Cognitive Impairments in the Real World.)
The P.I.E.C.E.S. checklist is a helpful tool for determining the differential diagnosis of cognitive impairment or dementia. It was developed in Ontario as a provincial training strategy to enhance the ability of long-term care facility staff to meet the care requirements of people with complex physical and cognitive or mental health needs and associated behavioural issues. P.I.E.C.E.S. stands for:

In this framework, cognitive impairment can result from a physical or medical cause or from another intellectual or emotional disorder. The cognitive impairment or disorder, in turn, can be affected positively or negatively by the match between the person’s capabilities and the demands being put on the person, along with the environmental and social context and life course.

You can use the physical, intellectual and emotional components of the P.I.E.C.E.S. checklist to determine the differential diagnosis, as well as  to identify comorbid conditions that may be affecting the quality of life of patients with cognitive impairment or dementia.

There are several other factors and conditions you need to consider in the differential diagnosis of dementia in older adults. 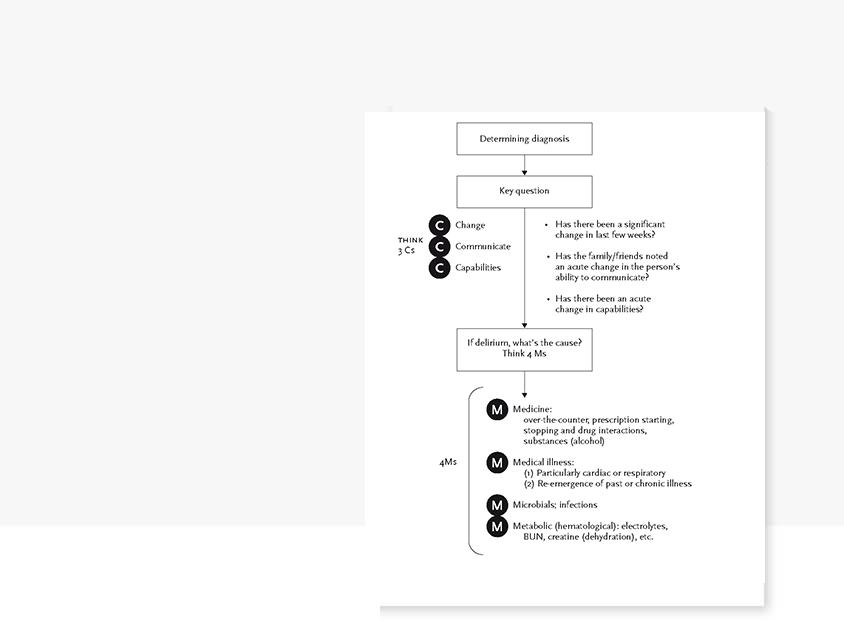 An algorithm for detecting delirium and determining its cause.

Emotional: Depression or Other Psychiatric Disorders